War of the Damned (series) by Michael Todd and Michael Anderle
My rating: ⭐ ⭐ ⭐ ⭐ out of 5 stars 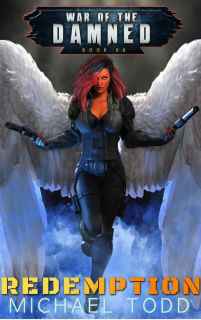 The War of the Damned is upon us, so be careful who you follow. It might be the last decision you ever make.

Three months ago there was a demon invasion. Due to that, the world has been dealing with changes in just who the enemy really is.

While old rules are thrown aside.

The mercenary named Katie (or KatieDora by some) is trying to take a much-needed vacation.

Unfortunately, both friends and foes want her in the worst possible way.

Katie’s Killers are facing a new reality, one where they are needed more because the world’s eyes have just been uncovered.

Sometimes it just doesn’t pay to get up in the morning.

War of the Damned is the continuation of the adventures of Katie and Pandora which started in the Protected by the Damned series. It contains eight books in all and none of them got less than 4 out of 5 stars from me. Actually the last got a 5 star rating because I really loved how Katie and Pandora stuck it to the demons in that one.

This series continues in much the same spirit as the first series. The good parts from that series is taken over into this one. There’s Katie and Pandora of course with their ass kicking and bantering. A lot of her old friends are there as well although they are generally playing second fiddle to Katie in this series. One of my new favorites is a certain, unusually trustworthy army general. However, make no mistake about it, Katie is the boss in this series.

As the name of the series implies the stakes and action is taken to the next level in this series. It is now an outright war against the demons. The world has been made aware that there are things that go bump in the night and Katie is becoming a public, very public, person. Katie, as well as Pandora, also develops quite a lot in this series. Both as a person and as far as her powers go. The latter is of course causing the demons some slight setbacks.

One thing that is, mostly, quite fun reading in this series is the demon side of things. How they banter among themselves, plot, scheme and still usually gets some painful instrument showed up their rectum by Katie & Co.

In addition to the damned and the usual demons we get a few additional interesting characters ranging from higher level demons to leviathans and even to Lucifer himself. The latter being the real deal, as in The Devil, Satan etc…, and not the silly playboy in the TV-show of course.

As with the previous series the writing is on the light, more humorous, side. The Dresden Files quality it is not, but it is a fun and enjoyable read. No annoying love triangle which is a plus. As usual when Anderle (although I’m sure these books are mostly written by Michael Todd) and his “cronies” are involved the language is … “colorful”. It doesn’t disturb me one bit but those easily offended people who takes offence from some adult language should probably read some other books.

There are some less good parts throughout the series as well of course. Like a few dumbass military officers who don’t mind endangering humanity for their own personal gain, or the most important place on the planet being guarded by a handful (literally) of men only. The most cringe-worthy part was probably when the author dragged in Schwarzenegger and tried to show off or be funny or something with dumbass phrases like “Ich komme wieder”. That was a real low.

However, on the whole it I had great fun reading this series. The first book in the next series, War of the Angels, is already in the queue on my tablet.

P.S.
I will not even bother putting up this review on Amazon with their hypocritical “Oh my God he wrote ass…” kind of censoring of the reviews. I might put up a post about why I more or less stopped putting up reviews on Amazon at some time in the future.

One thought on “War of the Damned (series): Enjoyable continuation of Protected by the Damned.”