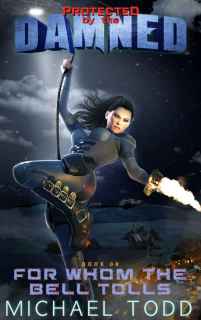 Katie Maddison never wanted to learn how to kick a demon’s ass, all she was doing was helping a fellow university student with his Chem homework.

She just trusted people too much.

Now, she will be the new weapon in a war she had no idea existed with warriors wielding both weapons and supernatural abilities.

People possessed by Demons, but still remaining in control of their bodies.
One of the most powerful Demon’s in Hell can’t defeat his sister, so he sets her up to be sacrificed and killed.

The only problem? The human she possesses retained her sanity and together they might be a catalyst to change the future of the war.

If they can stay alive and learn how to share one body, that is.

Now, a millennium old Demon who has no morals is stuck with a hard-headed young woman, who has her own ideas regarding what her future will be.

Together, they work out a truce, of sorts.

Until the Demon gets hooked on soap operas, game shows and changing Katie’s body without permission.

Then All Hell Breaks Loose.

I was not entirely convinced after having read the first installment of this series. However I persisted in reading it and I am quite happy that I did because now, after having finished the series, I have found it a fairly enjoyable ride.

There have been a few ups and down. Two books, including the first one, was barely getting a 3 out of 5, one scored 5 out of 5 and the rest was a 4 out of 5 for me.

I do like the main protagonist as well as her entourage. That includes her demon, Pandora, which we later will get to know under a different name. The dialog between Katie and Pandora can be quite funny although sometimes it does get into silly land. Both Katie and Pandora as well as their relationship undergoes quite a lot of development as the series progresses.

The main purpose of Katie and The Damned is kicking demon ass of course. Something they do with quite a bit of bravado. Especially later in the series when Katie has developed both her confidence and her skills. The series has pretty good action plain and simple. I also like that the foundation of the fantasy parts in the series is pretty classic mythology. Heaven and hell. Demons and angles.

This is Urban Fantasy so what about the “obligatory” love triangle? Luckily there is not much of that. At least not the usual poorly conceived nonsense with a lot of unhappy love, whining and explicit fucking around in strange places. That is not to say that the subject is not there. Pandora is quite focused on both male and female anatomy after all and she doesn’t exactly need instructions in the matter. Mostly it is more humorous than serious though.

The books takes us through a series of adventures while following a red thread towards the final show down…of this series that is. Katie’s adventures continues in War of the Damned. Not surprisingly I have already started to read that series as well and so far I like where it is going.

There are some parts of the series that was not exactly my favorite parts. Usually those involved dumbass politicians or military officers just screwing things up with their stupidity. Sometimes I felt the author just went off and spent too much time on silly things and side stories like Pandora’s obsession with donuts and certain other foods. There were some annoying references to media’s pet peeve, climate change, as well. One of the books kind of felt disjointed and somewhat uninteresting because of these things.

Overall however I did quite enjoy the series. It is not on the level of The Dresden Files or similar works but it is a fairly solid urban fantasy series. Simple but enjoyable.

One thought on “Protected by the Damned: A few ups and downs but overall fairly enjoyable.”