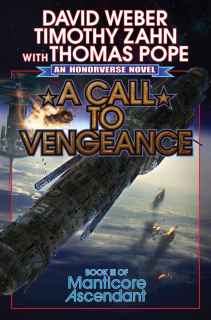 After the disastrous attack on the Manticoran home system by forces unknown, the Royal Manticoran Navy stands on the brink of collapse. A shadowy enemy with the resources to hurl warships across hundreds of light years seeks to conquer the Star Kingdom for reasons unknown, while forces from within Manticore’s own government seek to discredit and weaken the Navy for reasons very much known: their own political gain.

It’s up to officers like Travis Long and Lisa Donnelly to defend the Star Kingdom and the Royal Manticoran Navy from these threats, but the challenge is greater than any they have faced before. Weakened but not defeated, the mercenary forces and their mysterious employer could return at any time, and the anti-Navy faction within Parliament is growing. The situation becomes even more dire when fresh tragedy strikes the Star Kingdom.

While the House of Winton faces their enemies at home, Travis, Lisa, and the other officers of the Royal Manticoran Navy must reunite with old friends and join new allies to hunt down and eliminate the forces arrayed against them in a galaxy-spanning conspiracy.

Manticore has learned that the universe is not a safe place, but the Star Kingdom’s enemies are about to learn it’s dangerous to mess with the Manticore!

This is what David Weber does best, military space opera. His Honor Harrington series was probably the first real space opera that I read. I liked it greatly and Weber has stayed as one of my favorite authors of military science fiction ever since.

His latest works have frequently suffered from a bit of verbosity overkill and have been dragged down by talk, talk and more talk. This book is not entirely free from this but it is, luckily, not too bad.

As usual with this author the book is very well written with a fairly complex and well thought out plot and plenty of details in both the overall universe and the characters. There is, as always with David Weber, a fair amount of politics, scheming and backstabbing. Despicable characters as well as heroic ones are plentiful and, unfortunately, the despicable ones can be found on Manticore’s home turf as well.

Some times I am tempted to compare David Weber with George R.R. Martin, a science fiction version of Martin so to speak, although Martin is showing even less constraint when it comes to the diabolical plotting and scheming than Weber. Also, David Weber do not kill off one of the favorite characters in every second chapter or so.

On the whole the book is a very enjoyable action/thriller/space opera. Sometimes the lengthy dialogue as well as the politics becomes a bit tedious for this particular reader but it is compensated by Weber’s top notch handling of military tactics and space combat.

I hope that we have more books coming in this series. I would quite like to see one where Manticore finally discovers why they were being attacked in the first place and what a literal gold mine they are sitting on. Of course some beefing up of the Manticore’s military capability and a bit of payback time would be nice to have on the menu as well.