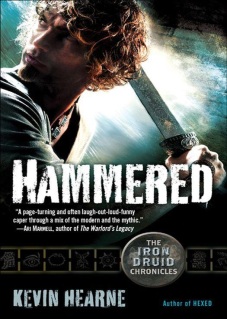 Hammered (The Iron Druid Chronicles #3) by Kevin Hearne
My rating: 5 out of 10 stars

Thor, the Norse god of thunder, is worse than a blowhard and a bully—he’s ruined countless lives and killed scores of innocents. After centuries, Viking vampire Leif Helgarson is ready to get his vengeance, and he’s asked his friend Atticus O’Sullivan, the last of the Druids, to help take down this Norse nightmare.

One survival strategy has worked for Atticus for more than two thousand years: stay away from the guy with the lightning bolts. But things are heating up in Atticus’s home base of Tempe, Arizona. There’s a vampire turf war brewing, and Russian demon hunters who call themselves the Hammers of God are running rampant. Despite multiple warnings and portents of dire consequences, Atticus and Leif journey to the Norse plain of Asgard, where they team up with a werewolf, a sorcerer, and an army of frost giants for an epic showdown against vicious Valkyries, angry gods, and the hammer-wielding Thunder Thug himself.

This, the third book in the series, was a bit of a downhill trip as far as I am concerned. For me it is way over the top with a story more suitable for a comics magazine. Gods and ancient entities are bumped off like there was no tomorrow and the story really never got me very interested.

There are still a few good parts. Atticus is still a nice character and his interaction with other people are still quite fun at times. It is as if the author knew that the story was on the thin side though since a good chunk of the book is used for the three main sub-characters telling their story as to how they encountered Thor before and why they wanted to kill him. Sure, the stories were in line with the main story but it still felt like three short stories where baked into the book.

I have a bit of difficulty writing a detailed review of this book since it really felt that there was not that much in it that got me immersed in the story. Still it was not really a total turkey mainly thanks to the likable characters and quite a bit of enjoyable, although at times a bit juvenile, humor.

I think that, especially if you liked the previous books, you just have to read it and make up your own mind about this one.