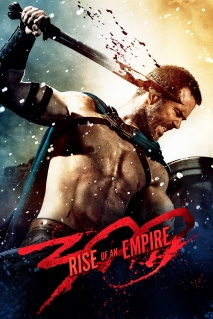 After its victory over Leonidas’ 300, the Persian Army under the command of Xerxes marches towards the major Greek city-states. The Democratic city of Athens, first on the path of Xerxes’ army, bases its strength on its fleet, led by admiral Themistocles. Themistocles is forced to an unwilling alliance with the traditional rival of Athens, oligarchic Sparta whose might lies with its superior infantry troops. But Xerxes still reigns supreme in numbers over sea and land.

This is one of these movies which will always have its detractors because it is not historically correct. There are certain movies in which you expect a certain amount of historical accuracy and there are certain movies where you do not. This is one of the latter. You must be out of your mind if you ever expected any great deal of historical accuracy from this movie (or any Hollywood production nowadays for that matter). Therefore it pains me to see the reviews that slams this movie with a one-star rating and moans about how it is screwing with the (their) history. I would certainly not call this a great movie but, as a movie, it is far from the one-star range.

The movie is watchable, it is even somewhat enjoyable to watch but it is not really a great and epic movie. There are lots of action which is one of the good parts. Some of the scenery, especially the naval ones, are quite magnificent even though they are somewhat overdone in the usual Hollywood way. The bow waves make these heavy, wooden, oar-powered ships look like they are speeding ahead at 30 knots for instance.

The action is of the rather gory and blood splattering type. Given all the slow motion scenes with copious amounts of blood slowly floating in the air I would assume this was more out of intention than out of ignorance although the ease by which these ancient swords chopped through bones and necks seemed rather unbelievable. I do not mind blood and gore in my movies but I have to say that the blood and gore in this movie seemed to have taken precedence over the rest of the creative process.

The movie simply failed to inspire the awe that one would expect an epic movie of this type would do. Someone said that the movie played out a lot like a video game and to some extent that is true. I never really felt much for any of the characters when watching the movie. I found myself just waiting for the next action scene. The enjoyable part of this movie is really the action, the scenery and the effects, not the story or the characters.

The movie is watchable, even enjoyable depending on your expectations but far from great.

One thought on “300 – Rise of an Empire: Watchable but not great”