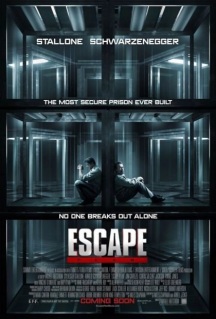 Escape Plan by Mikael Håfström on Blu-ray
My rating: 7 out of 10 stars

Ray Breslin is the world’s foremost authority on structural security. After analyzing every high security prison and learning a vast array of survival skills so he can design escape-proof prisons, his skills are put to the test. He’s framed and incarcerated in a master prison he designed himself. He needs to escape and find the person who put him behind bars.

This is a movie that had more or less escaped under my radar until I saw it mentioned in one of my news feeds as a Blu-ray giveaway a couple of days ago. Given that it had both Stallone and Schwarzenegger in it, it was really a must buy for me.

The escape from prison plot theme is not exactly a new idea but must be considered a rather classical one. A lot of great books and movies have, if not been centered around that theme so at least had it as a major plot element. I would say that it is rather difficult to make a new movie on this theme these days without it feeling a bit stale.

During my movie evening yesterday I was happy to find that this one succeeds quite well in not feeling stale. It also succeeds very well in pairing together Stallone and Schwarzenegger without making it deteriorate into some action hero parody.

The basic plot is in one sense the classical hero gets framed, thrown into jail and has to escape. In another sense it is slightly unconventional in that our hero is not only an escape artist, or rather an escape specialist, but a legal one at that.

Both Stallone and Schwarzenegger are doing a good job of their roles. We all know that these two actors are not exactly Shakespeare-material and is not really competing for any acting Oscars but they do deliver solid performance as male, though-guy, heroes.

The bad guy at the prison is not too bad, in terms of performance, either. The one person I felt was a bit meh was the guy who set Breslin up. I also think they could have made more of a show in nailing that bastard in the end. Not that he did not get what he deserved but I missed a “I’m back” moment with a confrontation between Breslin and him.

On the whole a quite enjoyable movie even though the prison break theme is not one of my favorite ones. Oh, and as usual Rotten Tomatoes “official” rating is pure nonsense. Due to their idiotic rating mechanism they flag it as rotten which it most certainly is not.