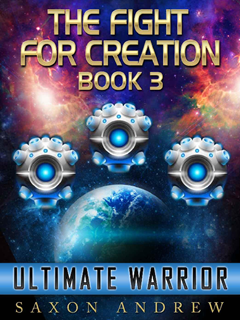 Ultimate Warrior (The Fight for Creation, #3) by Saxon Andrew
My rating: 8 out of 10 stars

The Realm has arrived at the point where the four most dangerous species in Creation must be confronted. Twenty thousand years of struggle and war have led up to this defining moment and the enemies arrayed against the Realm are formidable. But a new Warrior has been created to use the most dangerous species in existence as a tool of destruction. Would this new warrior prove to be the Ultimate Warrior or would the tool turn on the Realm and destroy it. One mistake would prove fatal.
The final story of the Stars Realm comes to a conclusion that is action filled and will be hard to put down. The Realm’s survival depends on the Ultimate Warrior.

This is the last book in a long story arc that started with the Annihilation Series and ends with this one in The Fight for Creation Series. I have enjoyed these books very much although the level of the stories clearly put them in the young adult market segment. I think it was good that the series ended though since the books have started to become more and more repetitive. It is time for Saxon Andrew to look for new pastures (as he has already done with his Lens of Time and the recent Star Chase series) and I’m looking forward to read more works from him as he progresses.

This book provides a suitable end to the series. It has all the usual qualities of a Saxon Andrew book such as a refreshing simplicity (it is indeed young adult stuff), good guys are good guys and bad guys are bad guys (and gets their behinds whooped) and the action is plentiful. Naturally there is some romance in all of this. The hard science is, as usual, also pretty much absent. The technology is mostly unexplained and more fantasy than fiction. In these kinds of books I do not mind. These books do not really need things to be overly realistic or explained.

Sure the “hearing the music” bits was a bit silly and childish and so were some of the action sequences like the “walk in a line and kill everything in sight” part but the wonderful boyish, day-dreaming qualities of the book still makes it such a fun reading. Following Pixie and Mitch in the beginning was quite enjoyable, especially when she revealed who she really was. In general, I felt this book revolved more around a few individual characters, just like the first book in the Annihilation series, than some of the books in this story arc which where a bit overwhelming in their scope. In that sense it almost felt a bit like going back to the roots of the series. It was sad that one of the characters that I took an early liking to had to go and get himself shot up but I guess there had to be a little tragedy in the book as well.

Anyway, a good ending of a successful string of books indeed.